Notice: unserialize(): Error at offset 161 of 828 bytes in variable_initialize() (line 1252 of /home/ivquhbmn/domains/termesanlorenzo.eu/public_html/includes/bootstrap.inc).

The Euganean Hills Natural Park is the first Regional Park in Veneto and can be considered a real natural open-air gym: excursions, trekking, sport climbing, golf, mtb routes, cycle paths along rivers, navigable canals for rowing, adventure parks or horseback riding; any activity fits perfectly with our territory.
The Euganean Hills area collects about a hundred reliefs that do not exceed 600 meters in height; the dense network of marked trails that runs through them allows you to cross them safely and fully enjoy the fantastic views they offer.
Whether you are training for a competition or just want to enjoy the beauty of the landscape, our territory will satisfy your every desire!
The cycle paths that develop in the area, accessible directly from our hotel and also usable for walks, allow you to reach and visit different locations, keeping you away from vehicles, immersed in nature.
Whatever activity you prefer, practicing it in these areas will enchant you too! 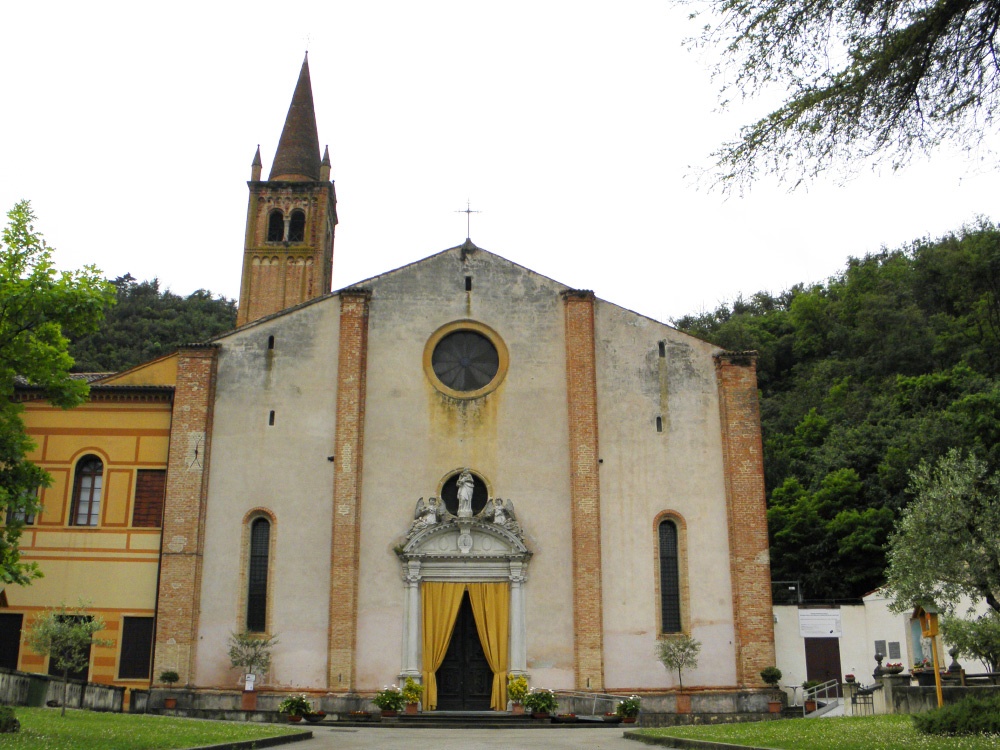 Sanctuary of the Madonna della Salute and Monte Ortone

The Sanctuary of the Madonna della Salute is a fifteenth-century church located at the foot of Mount Ortone, located about 350 meters from us. According to tradition, the origin of the sanctuary is to be attributed to the apparition of the Madonna to Pietro Falco, a soldier wounded in prayer, to whom he promised recovery if he immersed himself in the water of a nearby spring. Miraculously healed, the soldier found among the stones a painted table depicting the Madonna, Child Jesus and two saints. When the news spread, from that moment the Sanctuary and the painting have become a place and reason for pilgrimage.
Mount Ortone, which stands behind the church, can be covered with different solutions thanks to path number 19 (Length 3.6 km - Difference in height 150m - Easy difficulty). The paths offer splendid views, immersed in the dense Mediterranean scrub, which on clear days show up to the Venetian Prealps and the Dolomites. 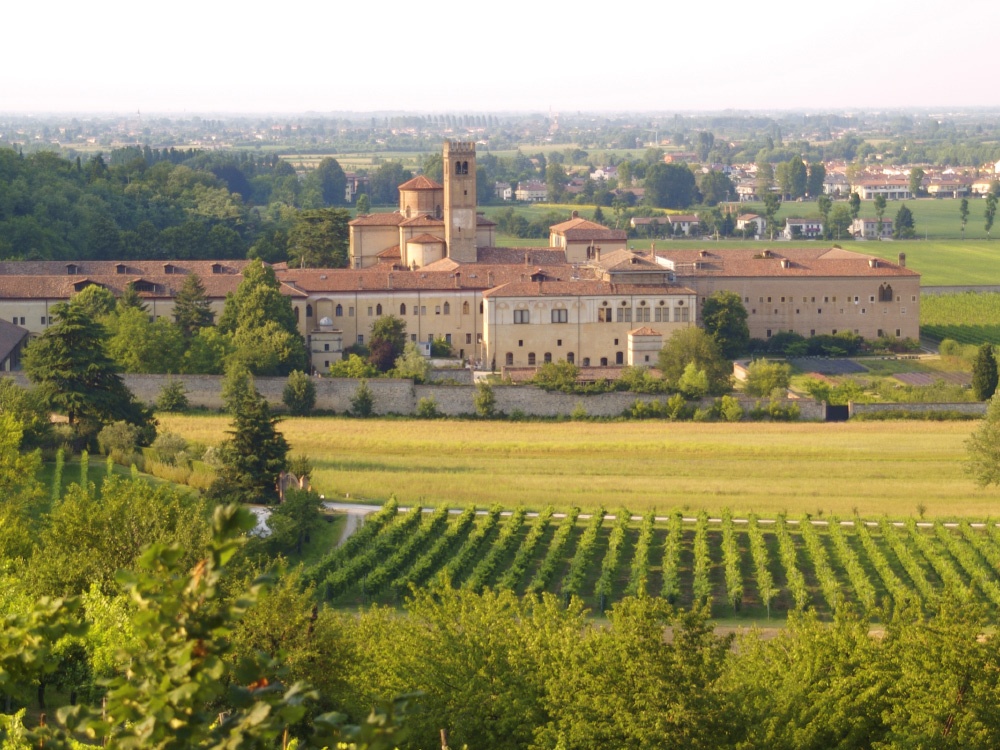 The Praglia Abbey is a Benedictine monastery founded in 1080 that stands among the meadows on the slopes of Monte Lonzina. This Renaissance jewel is divided into several rooms and arcades and houses one of the oldest historical libraries. The complex can be visited almost entirely and can also be easily reached by bicycle (about 15 minutes) following the cycle path that passes in front of our hotel.
The path of the Jubilee (n. 26 - Length 3.8 km - Difference in altitude 200m - Difficulty Easy) which is articulated on the nearby Monte Lonzina is an interesting circular route full of natural glimpses of the Euganean and Berico territories. 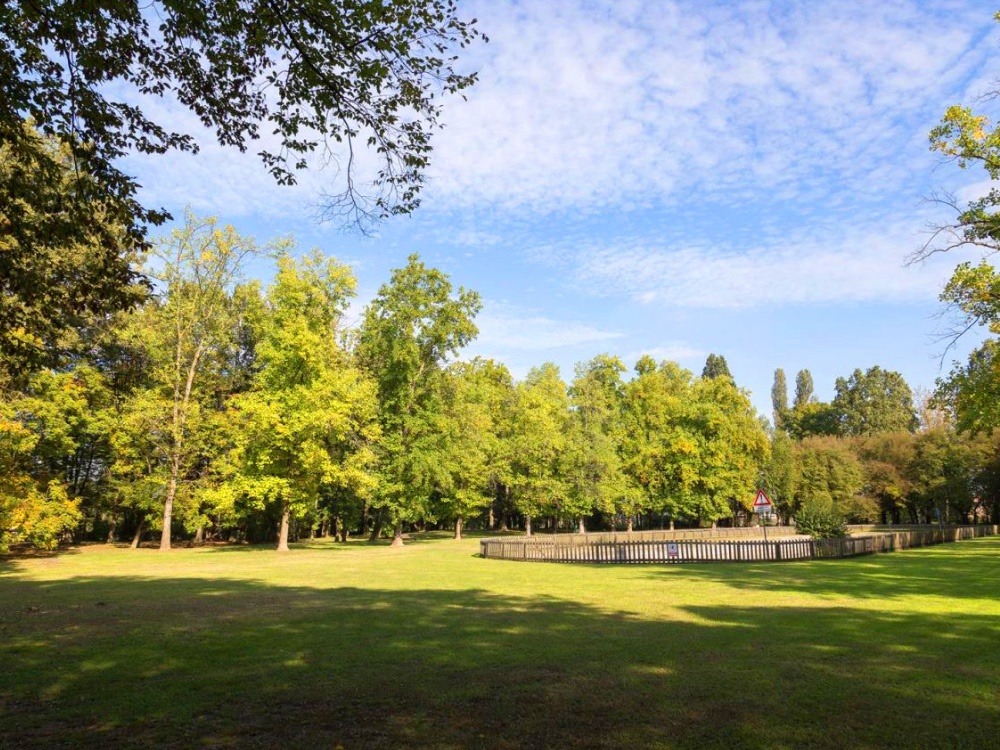 Villa Bembo Scalfo Monzino known as "la Bembiana" is a fifteenth-century villa which in 1918 became the headquarters of the Press Office of the Italian Supreme Command. Next to the villa there is its large monumental park which is open free to the public during the day. Villa Bembiana rises on the slopes of Monte Rosso on which a pleasant circular route develops: path n.16 (Length 2.6 km - Difference in height 155m - Hiking difficulty) 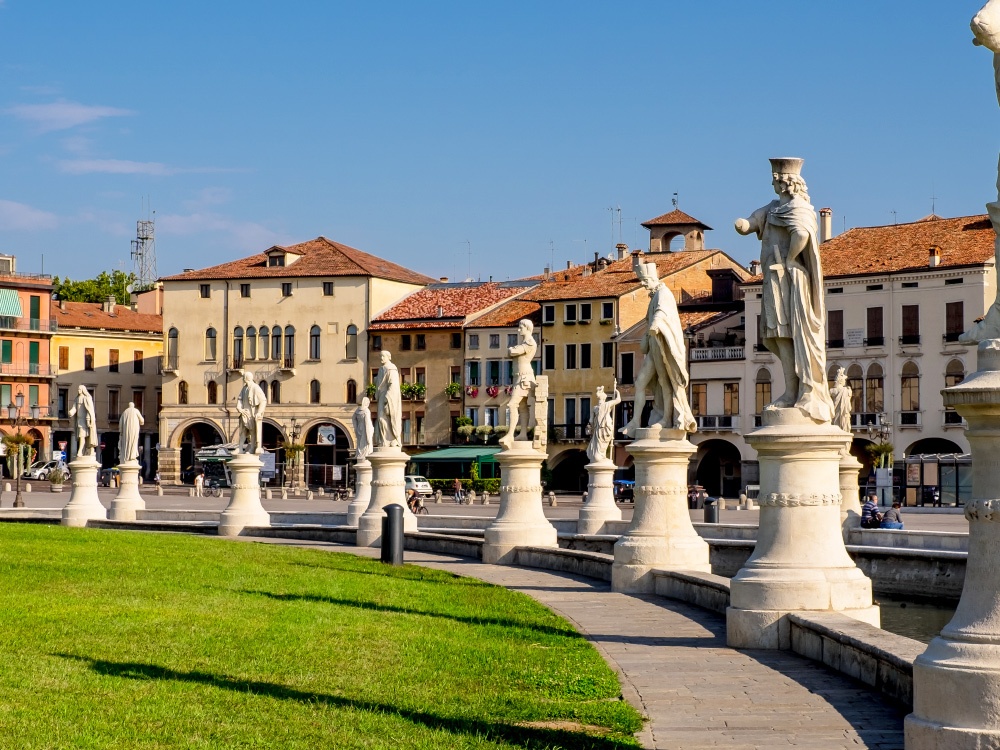 Padua is the closest city of art and can be reached by bus (line A or AT) in about 30 minutes. The Basilica of Sant'Antonio, the Scrovegni Chapel, the Prato della Valle, the Botanical Garden, the historic University or the Galileo Tower are just some of the beautiful places to discover. 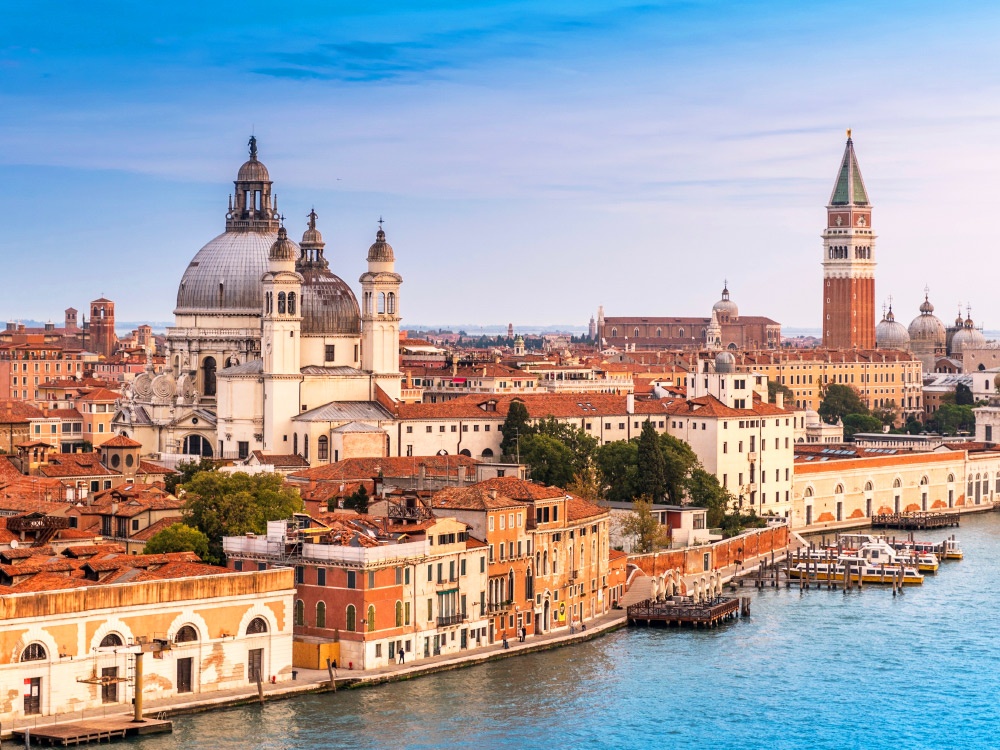 Venice is the provincial capital of Veneto and its characteristics and history make it a unique masterpiece in the world. Located 50 km from here, Venice can be easily reached by train from Terme Euganee station, in just over half an hour. 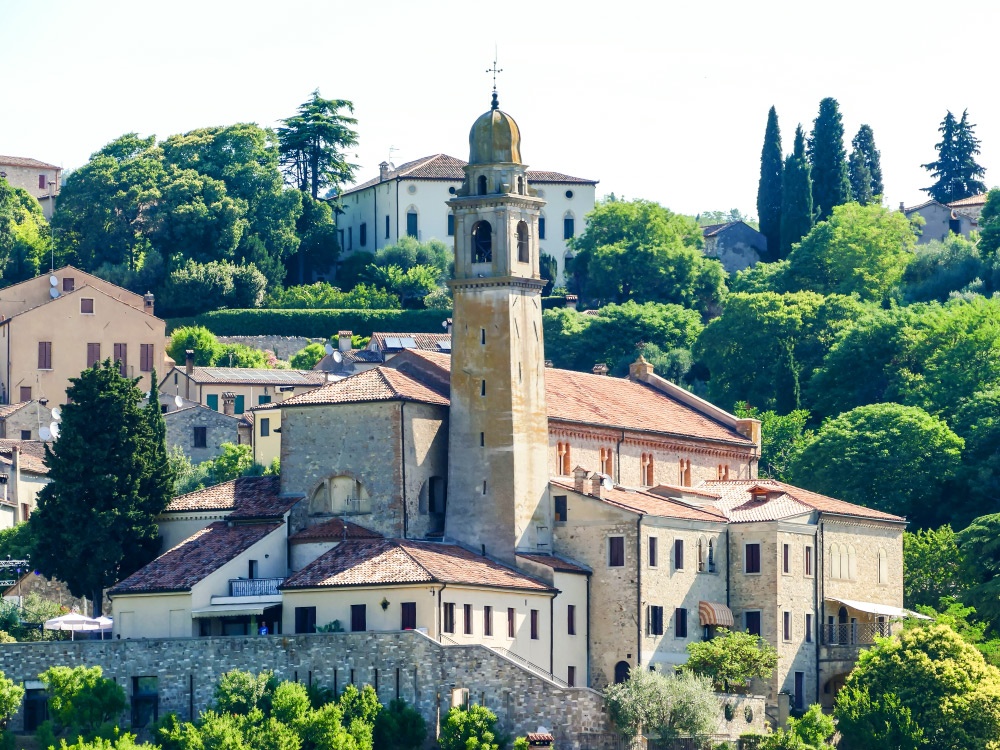 Arquà Petrarca is a delightful medieval village rich in history and literary culture. It has recently been included among the "most beautiful villages in Italy" and is considered the "Pearl of the Euganean Hills". It is home to the remains of the poet of the same name and has jujubes as a typical local product, a fruit used in the preparation of excellent dishes other than the proverbial "jujube broth", an ancient liqueur. 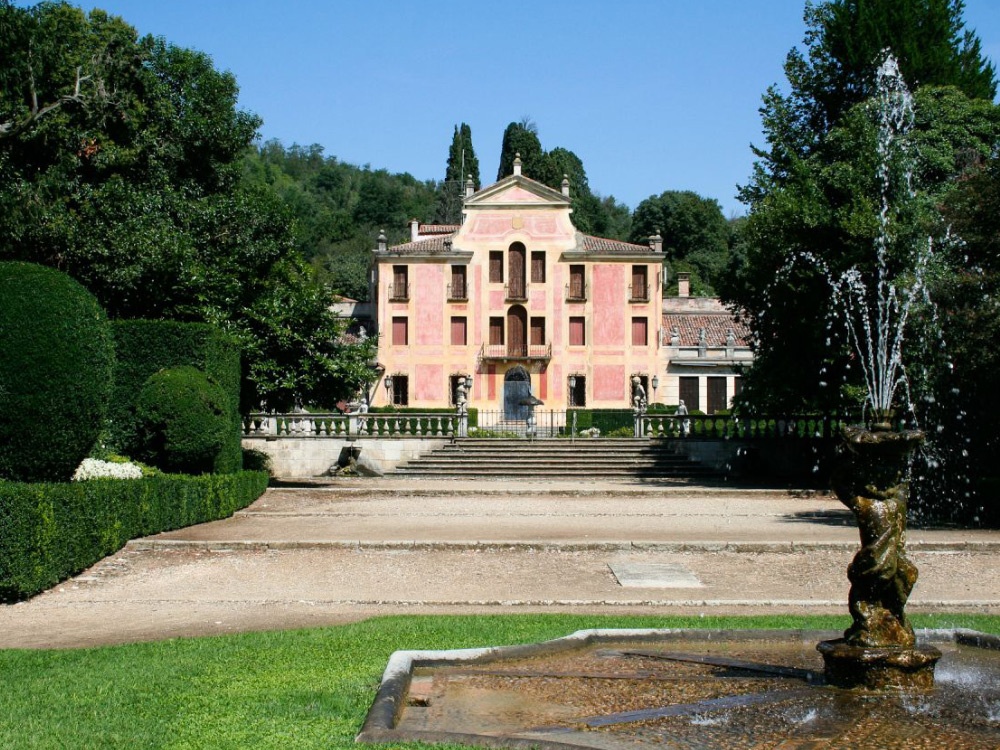 The monumental garden of Valsanzibio, designed by Luigi Bernini in the seventeenth century for the wealthy Venetian Barbarigo family, is considered a national heritage and was awarded as "the most beautiful garden in Italy". Built as a vow to God for the end of the plague, inside you can admire one of the most important historical labyrinths in the world and several human works full of symbolism, in perfect harmony with the natural landscape.

The Catajo Castle is considered one of the most impressive historic homes in Europe and is located in Battaglia Terme. Over the years it has been the princely ducal palace and imperial holiday residence of the Habsburgs, the large frescoed halls and the outdoor gardens have hosted literary cenacles and since the 16th century it has become the seat of one of the most important collections in Europe. 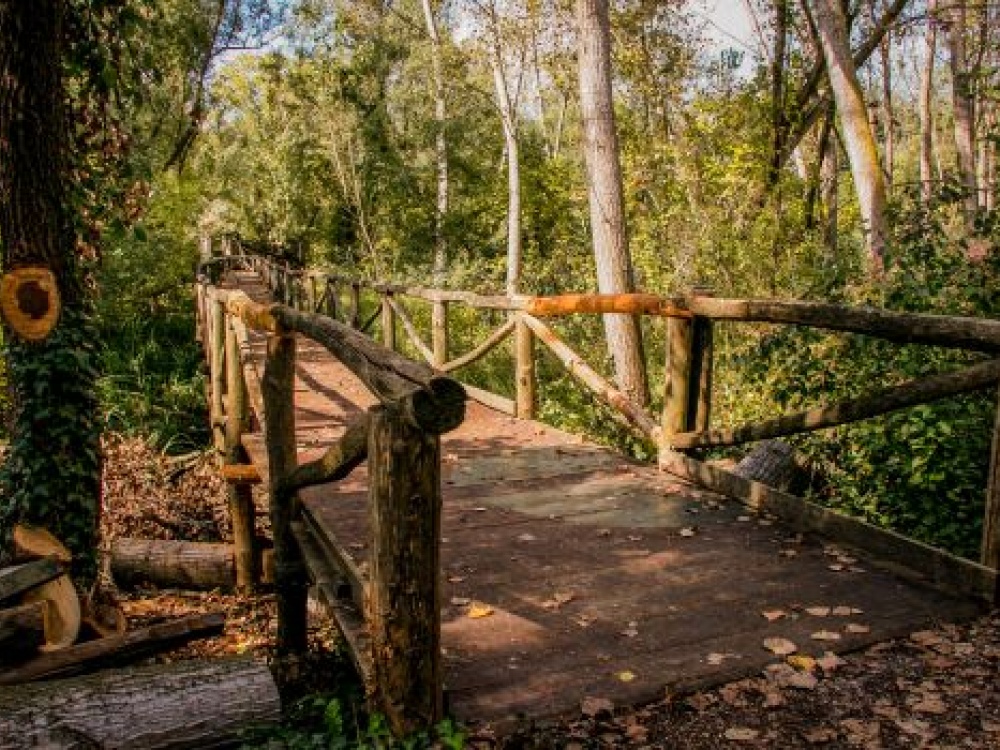 Monastery and Biotope of San Daniele

The San Daniele Biotope is a thematic itinerary near the Green Lake, in Torreglia, where a raised wooden walkway is articulated from which to observe the numerous species of aquatic birds, reptiles, amphibians and plants. The route takes its name from the nearby Colle (path no. 13 - Tourist Difficulty) on top of which stands the Benedictine Monastery of San Daniele, a 16th century oasis of peace and tranquility, open from Monday to Saturday. 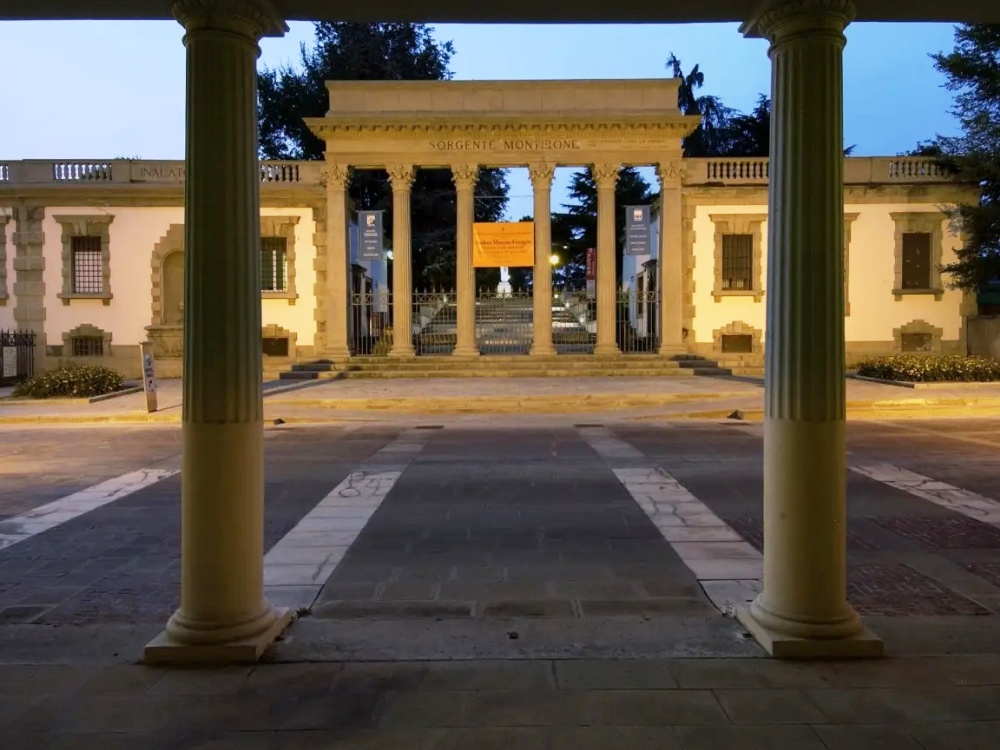 The spa vocation of our area is millenary, it dates back to the times of the ancient Romans. As evidence of the history of the “patavinae” waters mentioned in various Latin writings, today it is possible to visit the archaeological sites of Montirone in Abano Terme and the Roman excavations in Montegrotto. 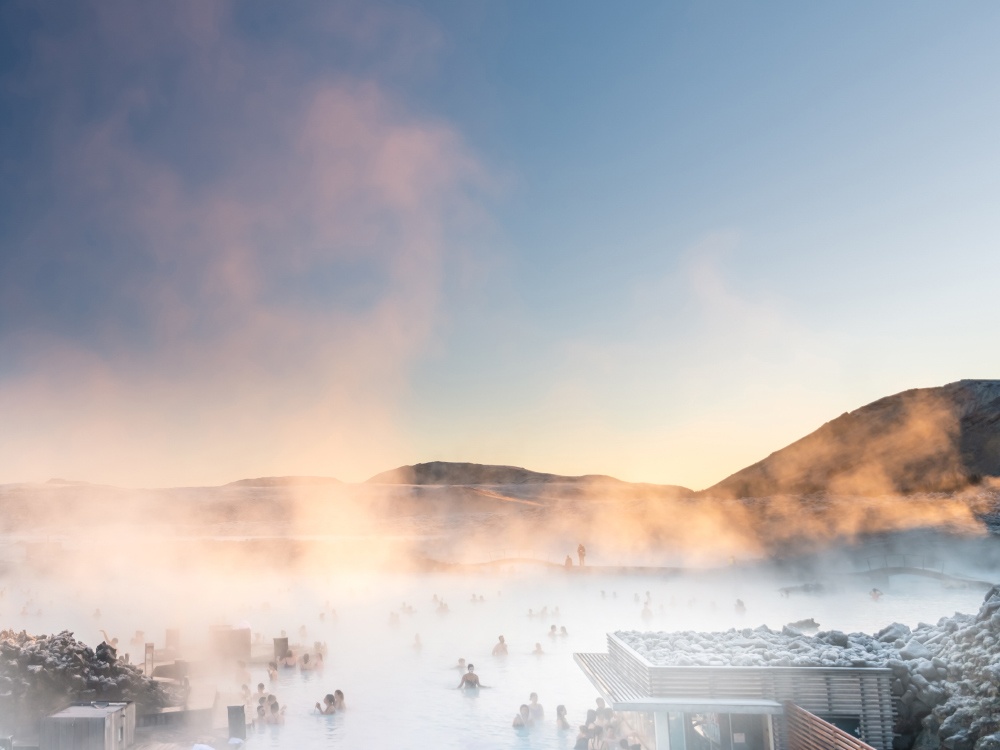 Museum of ancient thermalism and the territory

Inaugurated in 2021 in the Rustico di Villa Draghi in Montegrotto, the Thermalism Museum intends to tell the many aspects and benefits of the exploitation of thermal water starting from the Roman age, that is, the history of our territory and its deep identity. The museum is the result of twenty years of multidisciplinary research developed by different bodies including the University of Padua and the Archaeological Superintendency and can be visited from Friday to Sunday. 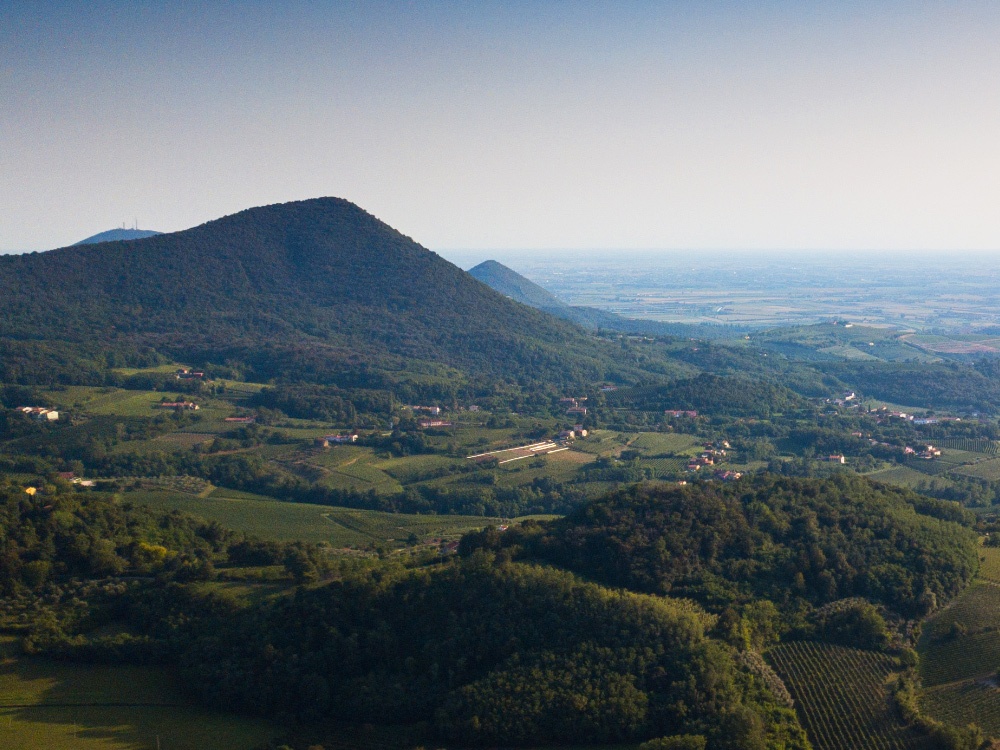 The ring of the Euganean Hills (E2)

The ring of the Euganean Hills is a cycle path of about 63 km that entirely surrounds the homonymous Regional Park. The road surface alternates asphalted sections with dirt roads and the difference in height of about 100 meters can be avoided with a short detour. Along the route you can see several Venetian villas, churches, historic buildings, archaeological areas and medieval towers.

The particular morphology of the Euganean Hills creates microclimates suitable for crops, in particular for the cultivation of vines and olive trees, and gives a characteristic flavor to local products.
In the wineries of the Euganean Hills excellent quality wines are produced, guaranteed by D.O.C. and D.O.C.G. The winemaking tradition of the area is centuries-old and ranges from white wines to characteristic red wines, capable of surprising even the most demanding palates. Furthermore, most of the wineries offer the opportunity to participate in tastings and guided tours of the companies, thus giving unforgettable experiences.
The excellence of the Euganean Hills is also found in the centuries-old tradition of olive processing: the oil of the Euganean Hills, appreciated all over the world, can be defined as decisive but balanced, particularly fruity and with a low acidity content. Honorable mention should also be made for another local excellence such as the Prosciutto Veneto Berico-Euganeo D.O.P., produced in the area between the Euganean Hills and the Berici, and the typical dishes of the tradition such as bigoli al torchio in sauce, risotto "ai bruscandoi ”(hop sprouts), potato gnocchi, polenta or the famous Paduan boiled meat. 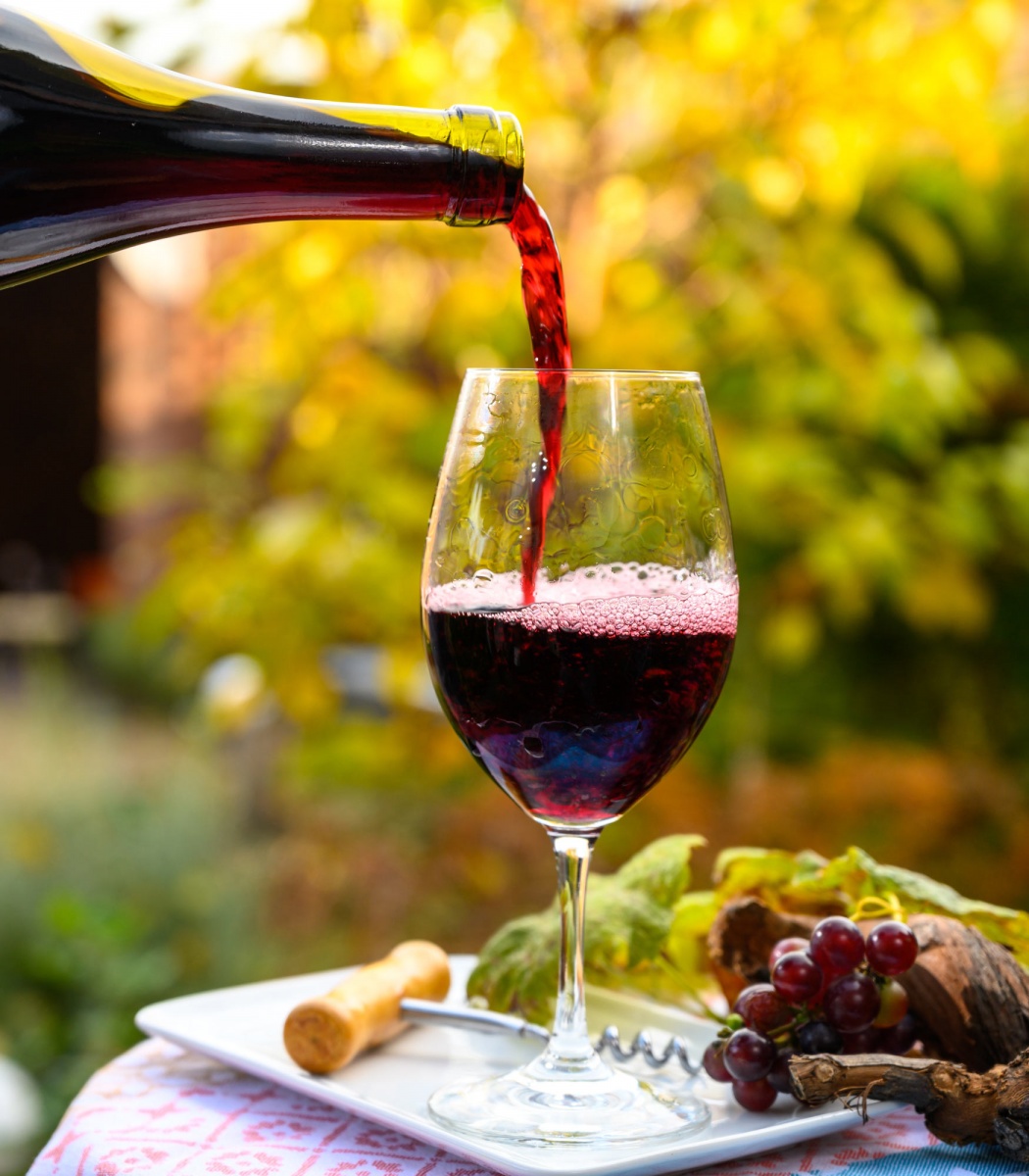 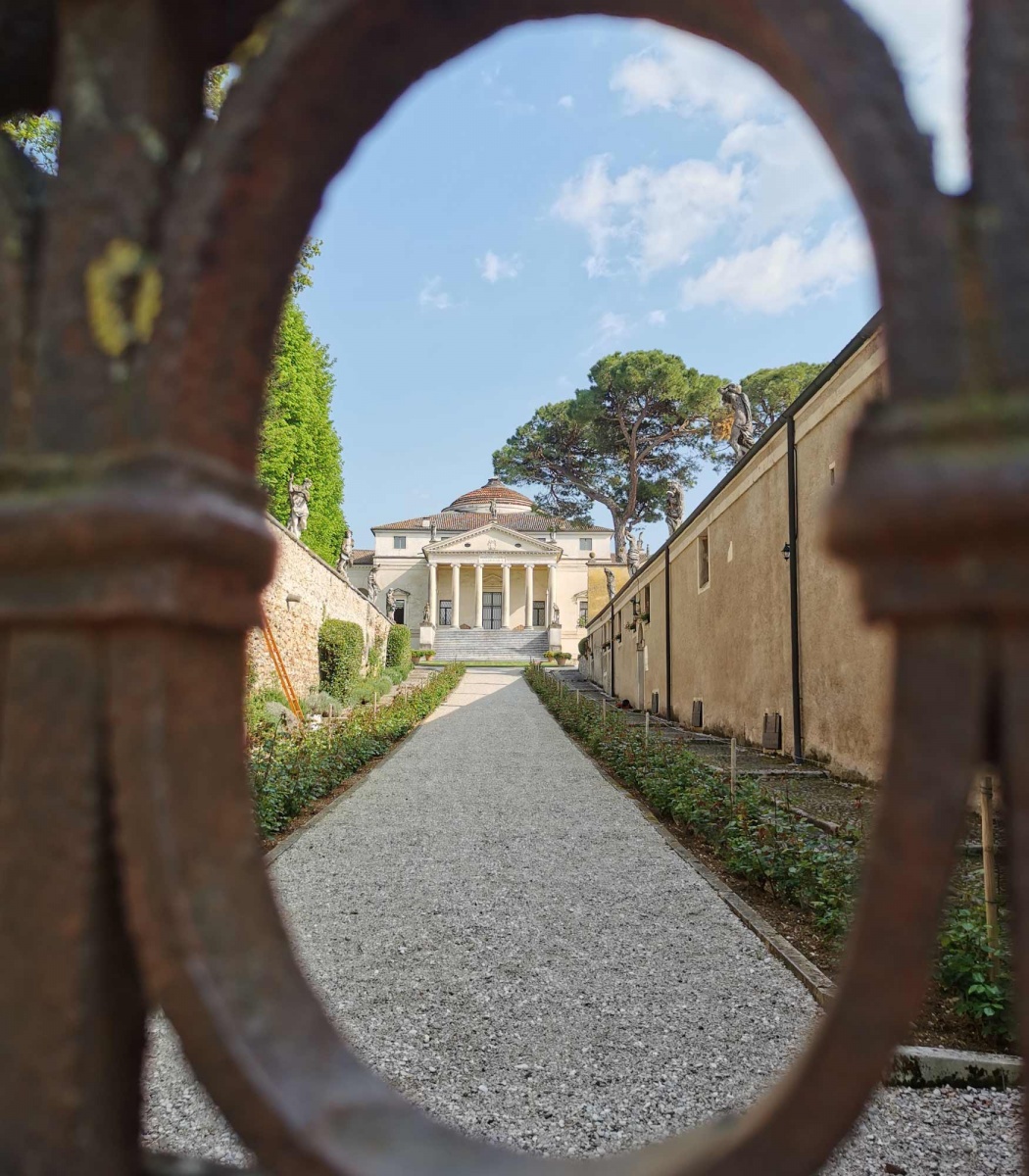 Within the Euganean Hills Regional Park there are more than sixty Venetian villas, built in different historical periods, with different styles and purposes. The most relevant examples are: Villa dei Vescovi in ​​Luvigliano, which inspired Palladio for Villa Almerico Capra; Villa Barbarigo in Valsanzibio, famous for hosting one of the most beautiful gardens in the world inside; the Castello del Catajo or Villa Emo Capodilista, a Montecchia hunting lodge.
There are also numerous places of faith including the Sanctuary of the Madonna della Salute in Monteortone, the Abbey of Praglia, a Renaissance jewel, the Hermitage of Mount Rua in Torreglia, the Sanctuary of the Seven Churches in Monselice or the ruins of the former Monastery. of the Olivetans on Mount Venda.
Also not to be forgotten is the medieval village of Arquà Petrarca, "pearl of the Euganean Hills" and home to the remains of the poet of the same name, the walled cities of Este and Monselice and the Museum of Ancient Thermalism and Territory in Montegrotto.
Our Destination proves to be convenient for connection to the main regional art cities such as Venice, Padua, Vicenza and Verona, not taking advantage of it during your vacation, it would certainly be a shame.